Awesome product. Skip to main content. About this product.

I went on a Voodoo pilgrimage in Haiti

Ratings and Reviews Write a review. Most relevant reviews See all 7 reviews. Better quality than expected!! I politely refused seconds. With Yvette's help and a cash donation I was finally able to attend an otherwise closed ceremony. But, as my guidebook informed, Mami Wata is the mermaid-like goddess of water who 'offers happiness and fortune to those with courage to meet her at the seaside'. 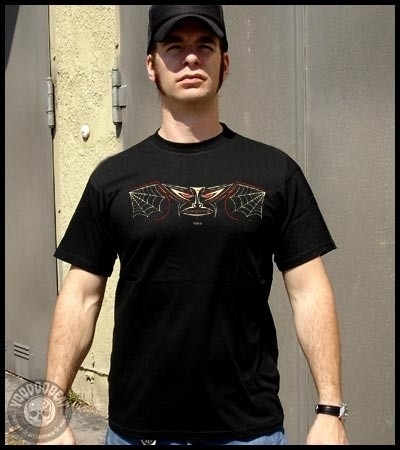 Instead, the main altar bereft of human skulls was a dribbling accumulation of wax and oil that reminded me of a cheesy table-decoration in an Italian restaurant. Still, it was an enjoyable, melodious, almost gospel affair. A harmonious female choir sang beautifully and gyrated before the head priest who sat with an ivory cane beneath an inflatable Santa Claus.

The priest later explained, ignoring my question about sticking pins into effigies of your enemies shame, I'd prepared a list! About 70km west from Porto Novo, Ouidah is the most atmospheric and elegantly crumbling small city. Every morning the irresistible aroma of freshly baked baguette drove me mad with hunger pangs and after a few days Voodoo was the last thing on my mind.

I wandered the city's caramel-coloured, sandy streets, noting sumptuous architectural landmarks such as the Portuguese Fort built in to administer slave transportations, and Afro-Brazilian mansions of emancipated slaves returning from the Americas. At dusk I settled into a bar near the Python Temple and watched clouds of fruit bats funnel from a mango tree like departing souls.

Yovo, yovo, bonjour. It traces the final 3. Remi, a local guide, showed me the marketplace where slavers bartered 15 male Africans for one cannon. At The Tree of Forgetfulness, Remi explained how "slaves would circle nine times to magically forget everything, so they weren't sad in their new lives. Approaching the coast, sea breezes rustled coconut groves while crabs gnashed their claws amid mangroves.

Beneath an archway on the shoreline, designed to symbolise 'The Gates of No Return', I watched the pummelling Atlantic surf churn grey with sediment and contemplated the terrified thoughts of captured Africans being paddled out to waiting slave galleons bobbing on the horizon. Many of them exported their Voodoo culture to colonies such as Brazil and Haiti, and the longer I spent in Ouidah, the more the still thriving undercurrent of spirit-worship began to reveal itself.

Amid pandemonium, the lady serving my meal screamed, ducked under my table and grabbed my legs. I raised my camera but several men with panic-stricken expressions warned me not to. The figure disappeared into the night. Later my hotel proprietor explained it to be Gounko, a Nigerian-Yoruba Voodoo figure that chased away evil spirits. While we spoke, local television showed a wild-eyed man carrying a slaughtered goat's head in his mouth by its severed neck ligaments. As he paraded through a crowd, some people collapsed, shaking like fever-pitched evangelists on American TV.

I sensed the Voodoo floodgates were opening. The next day I would witness something extraordinary. In a local compound where ripening calabash fruits aped basketballs, Remi wangled me into a family ceremony of ancestor worship: Egungun. This is one of Beninese Voodoo's most explosive events, where departed ancestral spirits take the form of humans in order to impart wisdom and justice to the living. Frenzied drumming ushered the Egungun into the compound. Possessed by the dead, men wore flamboyant sequin-spangled capes adorned with animal and human motifs. Their faces were veiled by cowry shell screens.

It was Chinese masquerade meets the 'running of the bulls' at Pamplona. Before long, Remi and I were pinned against a wall by a hulking Egungun. Averting my eyes, it brushed its horsehair flywhisk across my face. On a high, I headed north to Abomey the next day. After two days in a taxi with a driver called Filbert, the coastal plain subsided to a rippling landscape of green bush and ochre roads, studded by granite hills.

We passed coachloads of white-robed Christians fresh from celebrating the apparition of the Virgin Mary at Dassa-Zoume. The syncretism of Beninese religious life ensured some would be worshipping animist deities later that day. In halcyon times, Abomey was capital of the feared Dahomey Kingdom Benin's former name. Generations of Dahomian Kings fought internecine wars, maintained female Amazon warriors with a penchant for decapitation, and sold slaves to the Europeans to equip themselves militarily. But a crushing defeat to the French in saw most Dahomian palaces razed and the empire destroyed.

These days Abomey is a backwater with little pomp or grandeur. I'd come to see two surviving Unesco-listed Dahomian palaces: the 19th-century mud-walled palaces of Kings Ghezo and Glele, both packed with wonderfully macabre artefacts. King Ghezo's intricately carved throne rests upon four skulls of rival chiefs while beyond all taste amid fine Portuguese silks and British cut-glass decanters is a royal flywhisk assembled from a human cranium attached to a horsetail. Elsewhere, I learnt that Glele's harem once overflowed with 4, brides - remarkably his libido and heart held out for 31 years of rule.

In the inner sanctum of the Djeho Temple, built by Glele for his father Ghezo, the mortar is forged from the blood of 41 slaves. Nowadays it's possible to meet the King of Dahomey and keep your head. I entered the now modest Abomey palace of King Benhanzin II, kowtowing at his feet so my forehead brushed the ground. His Dahomian lineage was restored in after Marxist government rule ended and although his powers are limited these days, he's a charming man.

I asked him if he worshipped Voodoo? Kowtowing proved a little harder on the way out. After communing directly with the powerful Dankoli fetish, a further half-day's drive north at Savalou, Filbert and I returned south for my last day in Benin. Filbert knew of an important Voodoo ceremony occurring in Cotonou. 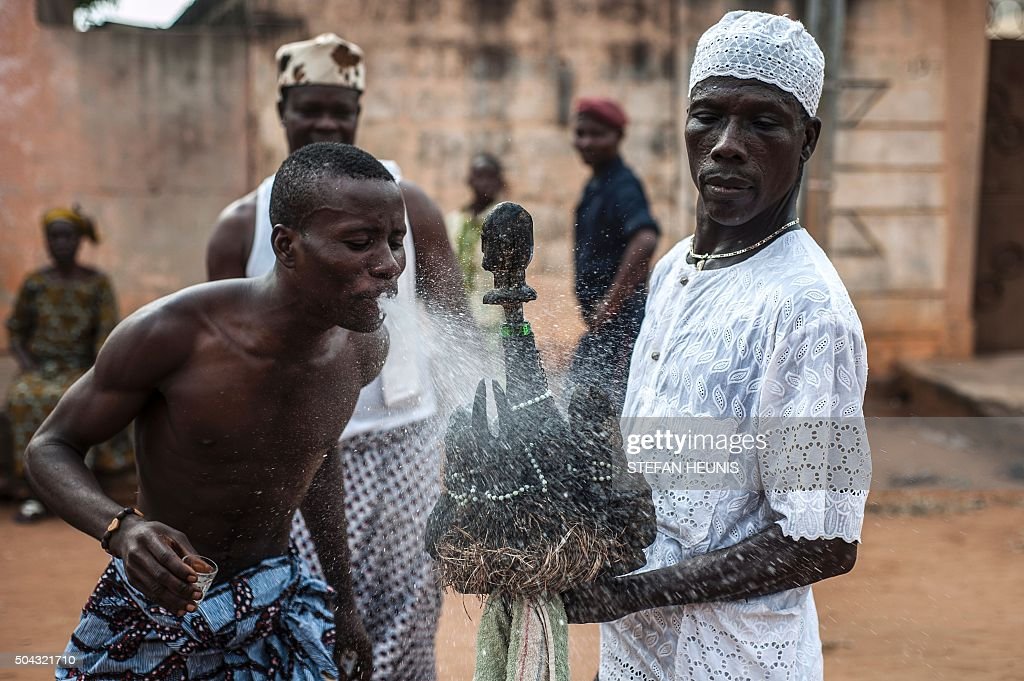 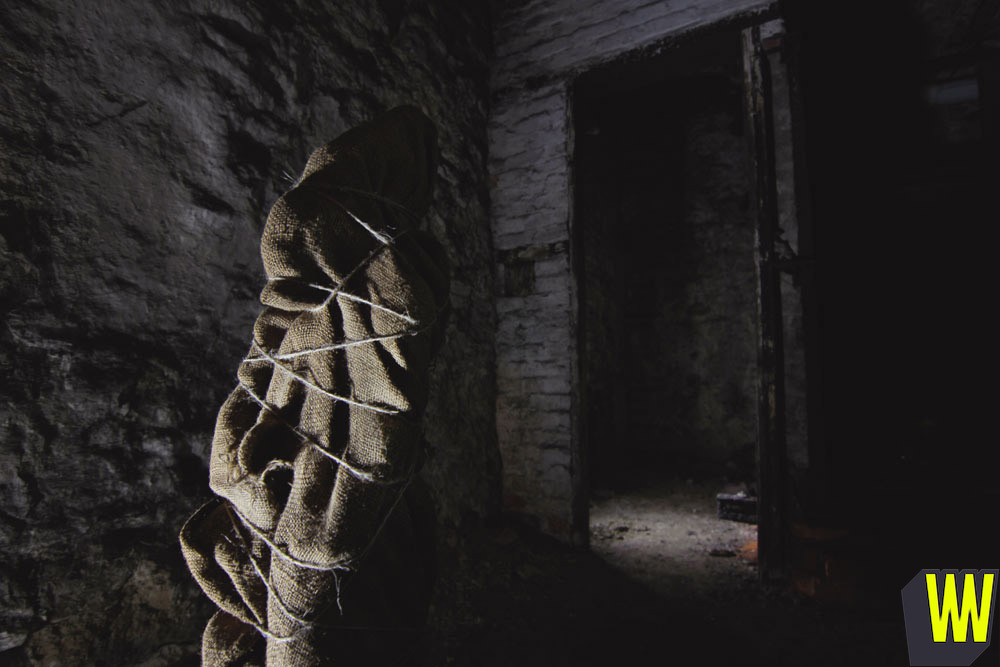 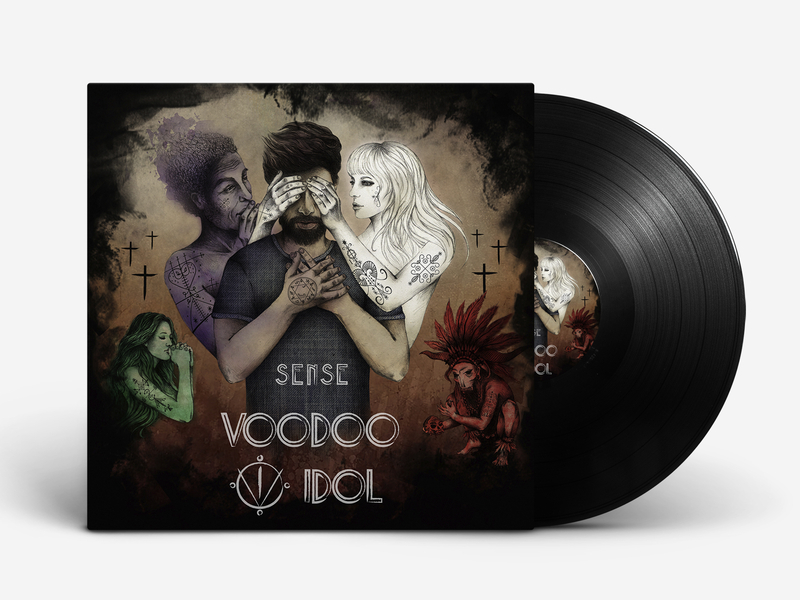